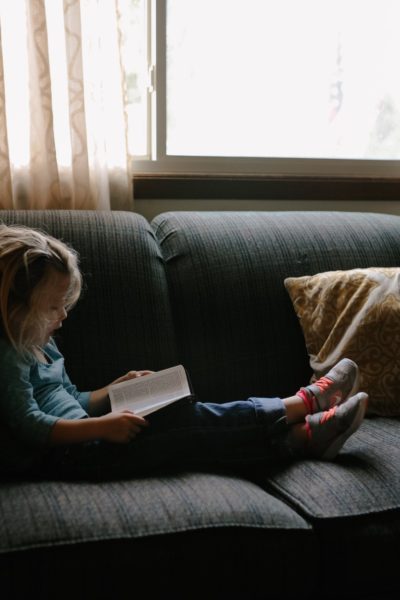 A friend suggested I tag devotions onto an activity that we already do everyday like eating breakfast, or during snack time.  Planning a specific time for it helped, but finding a family devotional is harder than it looks.

First off, the theology given to kids is pretty much dressed up moralism.  “Be good!” “God loves you when you are kind.” “Look at these Bible heroes!  Be like them!”

I wanted my kids to be good, of course!  But more than that, I wanted for them to know where to turn when they were not good.  I wanted books that would point to God’s strength, not our goodness-goals.

I also didn’t want anything too “touchy-feely”.  I wanted the deep stuff – but for kids. My search lead me to some great devotional books, including  The Jesus Storybook Bible, which is an all-time favorite in our home.  I still can never read it all the way through without crying.

After Sally Lloyd Jones’ book, we went through a devotional on Biblical conflict resolution, called The Young Peacemaker to give the kids some skills that I’d pray they’d put into practice here at home.  It helped… for a little while.

And then, about two years ago, when I was looking into what devotional my family would go through for school that year, I ended up reading a book about teaching children called For the Children’s Sake by Susan Schaeffer Macaulay.  It didn’t dawn on me until later that she was actually the daughter of Francis Schaeffer, theologian, philosopher, and founder of the school in Switzerland called L’Abri.

This book of hers talked about respecting the child’s mind.  It taught about remembering that the child, too, was made in the image of God, and considered how this perspective might change how we approach teaching them.

What floored me, though, was the way she implored us to give the Bible to children – straight, and unfiltered.

As in… just read it to them. No softening, no dumbing-down, no commentary.

Just read them the Bible with all the big words. Read it without cartoons or textured pages.  They won’t understand it all, but it just becomes a part of them over time.

Is this even possible?

I was pondering how my tribe of six loud kids would respond to me just reading a whole chapter of the Bible, praying, and moving on. Would it be complicated by the fact that one of them has ADHD, and two of them were not even school-aged?

Could it be as simple as reading the Bible to them?  Shouldn’t we play a game or something?  Shouldn’t there be coordinating coloring pages or songs that could go along with it?

Isn’t reading the Bible just about the driest, most boring way to present the Scriptures?  I felt lazy, because I had nothing to prepare or buy.

It seemed too simple.

The Word was there…

At the time, my oldest was reading The Hiding Place by Corrie Ten Boom, a story of a family hiding Jews during WWII, then being sent to a concentration camp as political prisoners.  In the book, Corrie talks about how her father gathered the family, opened the Bible and just read it each morning.  She was an adult – an “old maid” at that point – but she knew the Bible inside and out simply from her father reading it to her over and over again throughout her lifetime.

Corrie Ten Boom got God’s word inside of her. It was there when she struggled with her own sin. And in her struggles through sacrificing her family’s safety for people she never knew, the Word was there inside her, urging her on. With this encouragement in my heart, once we finished the current devotional, I put it on the shelf and took out my Bible.

I realized that my kids heard a lot of Bible stories at church and in books, but they’d never really heard any of the epistles in the New Testament. So I decided to start in Romans and decided I would read a chapter aloud every morning, all the way through the end of the New Testament.

I was a little scared, because as soon as I started reading, I realized that by some people’s standards, Romans 1 isn’t exactly the most “child-friendly passage.”  I froze a bit, thinking, maybe this is why people read sanitized versions that leave you feeling good, and with no need to explain anything.  I decided though, when we came to a tough passage, I would just keep reading a little further on until we got to a spot that ends well.

My kids loved it.

As it turned out, it wasn’t over their head.  Sure, they were allowed to color, or fidget quietly with Legos while I read to them.  But we kept it simple – we just read a chapter a day, and then prayed.  Sometimes I’d ask them for prayer requests.  Sometimes we would go around and pray individually. It was different and it was beautiful.

Amazingly, it didn’t feel like we were doing something good where we could be proud of ourselves.  It felt like something was being done to us, and that something was changing us.

Sometimes my kids had questions and we would discuss them.  Most of the time, we just moved on to the next part of our day.  I learned through it all that family devotions doesn’t have to be complicated.

We didn’t throw away our old devotionals, but they had a different place in our life now.  We just read them for fun.

Family devotions don’t have to be orchestrated or designed, or even brought down to a child’s level.  The real, actual Bible is for them, too.

Photo by Josh Applegate on Unsplash
Liked it? Take a second to support Women Encouraged on Patreon!