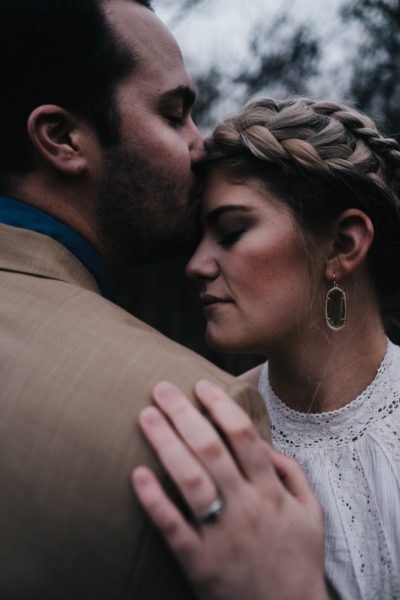 I spent the first few years of my marriage fighting against my husband. I’d fight against him when he didn’t show me love the way I wanted, like when he bought me simple gifts for my birthday instead of making a big production. The Enemy whispered lies like “he must not love you as much as you think if he can’t put any thought into planning your birthday.”

Before long, I made agreements with Satan about my husband. I’d nod my head with him in agreement when birthdays became disappointments. Date nights seemed dull, and romance was boring. Seeds of resentment and rejection took root in my heart. I kept track on my invisible scorecard of all the times my husband didn’t measure up.

The problem was no one was winning.

Who are you really fighting against?

I thought all those arguments were against my husband when really, I was losing the fight against Satan.

I remember barging into the bathroom one night while my husband was getting ready for bed. I was fuming because he not only left the dishwasher unloaded, but he also had not cleaned up after dinner. The one night I came home late and he couldn’t even bother to clean up, I thought.

After I finished spouting off everything I thought he did wrong, he looked me in the eyes and said, “You really think I’d leave a mess like that? After all the times I normally help clean up, you think I’m just some slob?” He turned his back and left the room without giving me a chance to reply.

I stood there looking at smeared toothpaste on my side of the sink, while my husband’s sink looked tidy. No, he’s not a slob, I thought to myself. So why did I jump all over him?

What appeared to be a stereotypical argument between husband and wife had resentment written all over it. Those disappointing birthdays and seemingly dull date nights flared up as soon as I saw the dishes in the sink.

Lies Satan whispered to me about my husband not being enough had permeated our relationship. Arguments escalated quickly.

I had to grasp what was brewing under the surface of our fights before I could partner with my husband in guarding our hearts against the lies. I had to stop agreeing with Satan about who my husband was.

It wasn’t until I grew tired of looking across at my husband for happiness and looked up to Christ instead for healing, when I realized I was fighting a losing battle. When I barged into the bathroom angry about dirty dishes, I was drawing a sword against my husband. Satan sat on the sidelines, cheering me on. If he can keep our eyes focused on each other’s faults, then we’ll miss God’s arrows pointing towards truth.

Fighting on the same team

We learn in Genesis 2:24 that man and woman join together as “one flesh” when they marry. I’ve read that verse dozens of times and always thought one flesh meant uniting our different personalities to serve the Lord. I knew intimacy as one flesh meant deepening our relationship beyond desire.

But what I failed to consider was how as one flesh, we are a team against the Enemy who is out to steal, kill and destroy our marriage. We know from Ephesians 6:12 that we wrestle “against the powers of this dark world and against the spiritual forces of evil.”

So why was I so quick to dismiss my marriage as a target? Maybe I was too busy looking to be right instead of looking for the truth.

All that time I thought we were fighting against each other, but I was allowing resentment to cloud my vision. All those supposed faults of my husband’s that I had focused on became smaller when I saw my own faults festering before me from an ugly wound I kept ignoring.

I wish I could say “Here’s a formula to help you remember that you and your husband are on the same team!” I wish I could offer you freedom from anger and hurt and resentment with just five easy steps or a quick Google search.

But quick fixes won’t restore brokenness. Being one flesh against the Enemy requires repentance and grace. When we stop worrying about the speck in our husband’s eye and focus on God chipping away at the plank in our own eye, then we can see our husband through the lens of grace. Pride becomes smaller as grace grows bigger.

God isn’t the Lord of behavior modification. But he is a God who calls us to call out to him. “Then you will call on me and come and pray to me, and I will listen to you.” (Jeremiah 29:12 NIV)

Fighting on the same team looks like prayer. Lots of prayer. Prayer for myself, for my husband and for wisdom. Prayer about keeping my mouth closed so I can hear God’s voice instead of my own. Praying while remembering you’re on the same team changes your perspective.

Uniting as one flesh

In marriage, God miraculously brings two sinful souls together, and he refines our hearts as we walk together with him. And with this hope, we can have victory over the tactics of the Devil. Jesus tells us we will have trouble in this world but “take heart! I have overcome the world” (John 16:33 NIV)

When we realize we aren’t battling against our husband but against Satan, then we can come to the Lord with our sin and find true redemption for our marriage. We can step fully into what it means to be one flesh.